TRTL, Canada's entry for the U.S. Department of Energy Solar Decathlon 2011, is a unique response to the culture of Treaty 7 Native Peoples in Southern Alberta. Inspired by the tipi, the house's rounded form, east-facing entrance, and south-facing windows relate to the sun as a traditional source of energy and life. The two-bedroom, open-concept design is flexible and includes ample space for storage, recreation, and communal gatherings for meals.

Canada's design integrates technology and tradition. From a technological perspective, green building materials and renewable energy technologies result in a house that is healthy, safe, durable, and affordable. From a traditional perspective, the design is guided by a holistic view of the home as a living part of a greater natural order. The result is TRTL (Technological Residence, Traditional Living), a house that respects the value of culture in promoting sustainability.

TRTL extends beyond its Treaty 7 partners to address issues faced by many native groups in Canada. Its features include:

Canada incorporates innovative technologies into its traditional house, including:

There are more than 600 native groups in Canada, totaling more than 1.1 million people. Housing failures within and beyond Treaty 7 include sub-standard design, implementation, and maintenance as well as demand that far exceeds supply. The collaborative design, validation, and cross-cultural dialogue employed in the creation of TRTL provide a model for affecting positive change. 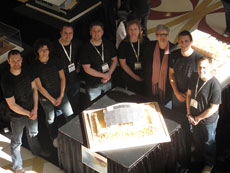 The members of Canada (courtesy of Canada).

A computer-generated rendering of Canada's TRTL (courtesy of Canada).

Neither the United States, nor the Department of Energy, nor the Alliance for Sustainable Energy LLC, nor any of their contractors, subcontractors, or their employees make any warranty, express or implied, or assume any legal liability or responsibility for the accuracy, completeness, or usefulness for any purpose of any technical resources or data attached or otherwise presented here as reference material.