Team Belgium aimed for simplicity with E-Cube, its entry for the U.S. Department of Energy Solar Decathlon 2011. This approach resulted in a design that is stripped of its nonessential components and finishes, leaving its structure and façade exposed to the interior. The ultra-efficient house is conceived as an affordable building kit that can be assembled in days rather than months.

The team was primarily interested in creating a comfortable, solar-powered house with a lot of space on a small budget. A conscious effort was made to avoid letting gadgetry dominate the overall experience of the house, so technical installations were grouped in a small compartment, and the photovoltaic system was placed on the flat roof out of sight.

The four principles that define E-Cube are modularity, affordability, flexibility, and efficiency. Features include:

The technologies used in E-Cube include:

E-Cube offers ample interior space and an environmental design adapted to Belgian conditions. The market appeal of the house lies mainly in the simplicity of construction methods and the potential for affordability. The house is essentially a building kit for a relatively inexperienced builder. As such, E-Cube may appeal to the would-be self-builder who lacks the time and knowledge to build a house from scratch. 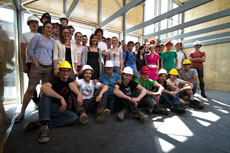 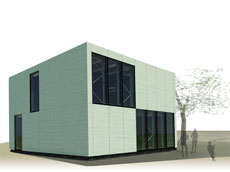 Neither the United States, nor the Department of Energy, nor the Alliance for Sustainable Energy LLC, nor any of their contractors, subcontractors, or their employees make any warranty, express or implied, or assume any legal liability or responsibility for the accuracy, completeness, or usefulness for any purpose of any technical resources or data attached or otherwise presented here as reference material.