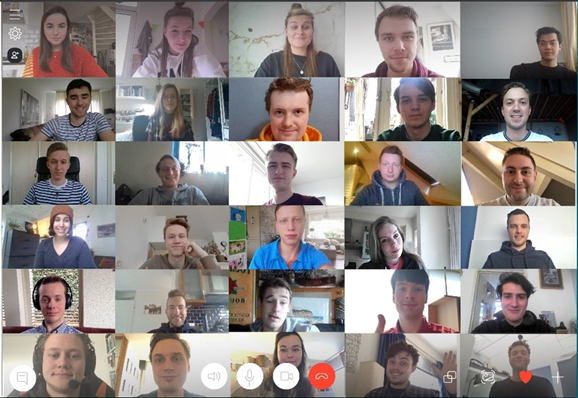 The housing sector in the Netherlands is experiencing pressure—a growing population is making it increasingly challenging to find a home, especially for young people. As a long-term solution to this housing crisis, the Celcius House team is building an environmentally sustainable house that is also within financial reach for everyone. The home is designed to store and reuse energy and rainwater, as well as maximize the reuse of materials throughout its life cycle. Completely modular, the home's design can be sized from a starter home up to a five-story building.

A modular approach forms the basis for the Celcius House concept—that is, simplifying building elements to create a standardized building method that will revolutionize the building industry. Using a concept akin to LEGO, the core of the Celcius House consists of a wooden frame to which LEGO-like wall and floor panels are attached. Add-ons such as finishes are considered separately so the resident can customize the house to their needs and preferences. This modular approach to building and thinking drastically simplifies the process of adding rooms, enlarging rooms, downsizing, upgrading, and relocating. In a traditionally constructed building, these processes are either highly cost-intensive, time-intensive, or impossible. With a Celcius House, all of this can be easily done without complicated building processes.

The Celcius House concept integrates the principles of a circular economy to create the smallest possible environmental footprint, using a building method that forms a closed loop in which raw materials are reused without losing their value. The concept contrasts with the current “take, make, and dispose” economy.

Because the house is modular, all elements can be easily detached to avoid damage during disassembly, allowing them to maintain their highest value for reuse. All material choices have been made with impacts on circularity and modularity in mind.

The Celcius Team used the Trias Energetica model developed by the Delft University of Technology as a guide for pursuing energy sustainability in the building sector. This model prioritizes energy savings in the design of an environmentally friendly building. Only after a building has been designed to minimize energy loss should there be a switch in focus from fossil fuels to renewable energy solutions. Then, as a last option, fossil fuels should be used and produced as efficiently as possible. The Celcius Team adheres to the first step of the Trias Energetica model by insulating the house to minimize energy loss, which requires the home to generate less energy. In contrast to the model, the house uses no fossil fuels—all the energy it consumes is generated by the house itself.

The target customer for the Celcius House is a 25- to 35-year-old couple who want to buy their first home. This customer represents a large group in the Netherlands, where a short supply of available houses has resulted in peak home prices, making the purchase of a first home difficult for many.

The couple wants the ability to personalize their house and make it their own. Furthermore, the target customer is motivated to live sustainably, and they value circularity, modularity, and self-sufficiency. The distinctive character of the Celcius House compared to the competitors in the Dutch housing market is its combination of circularity, modularity, and affordability. This makes the Celcius House a unique concept.

The house incorporates the principle of circularity, as building elements can be reused in other houses. Furthermore, insulation material consists of residual material from the food industry. Modularity is achieved, using standardized measures and the ability to exchange building elements. Elements are fixed to steel profiles, and only detachable connections are used, allowing for complete, repeated disassembly. Modularity and affordability, combined with self-sufficiency and circularity, are extremely important for the target market but do raise costs.

The target customer values sustainability, wants to do their part to reduce carbon dioxide emissions, and thinks it is important that no energy is lost. They want to start at home by generating sustainable energy themselves.

The modular concept makes the Celcius House design adaptable to an owner's lifetime needs. To make it as easy as possible for potential customers to configure their own house, the Celcius House team is conducting further housing market research to offer a range of standardized Celcius House modules ready for loading in a configurator app or website. This tool would allow a potential customer to build and customize a house and immediately identify its costs. The home's systems and rooms can be easily upgraded or downgraded over time, allowing the house to continually accommodate the needs and circumstances of the owner.

The Celcius House has a wood frame as well as floor, ceiling, and wall panels, enhancing aesthetic appeal and allowing for sustainable sourcing. Panels are insulated with organic materials that are chemically hardened, enabling them to become part of a circular economy. Energy from the solar panels is stored inside a battery, making the house self-sufficient for three days in case of a power outage. The system is designed to be neutral on the network capacity in normal situations. Occupants can choose to incorporate an air-to-water heat pump to keep the temperature stable, and can collect rainwater to use for the shower, toilet, coffee machine, or garden. Owners can also install a smart system that regulates power usage on its own to avoid wasting power. A vertical garden can be added to the facade to attract bees and other insects.

The house is designed to be modular and thus adaptive to owners' specific life needs. By standardizing the production process of the structural elements and designing a screw-free fastening system, the home becomes akin to a modular LEGO set for adults. After building the house, which can be done in less than six weeks, the house can grow and shrink in size without the need to engage a building company to engineer its expansion. Because every component and system are removable and interchangeable, every room scalable, and every pipeline movable, a target customer can begin living in a relatively simple version of the home and upgrade it later in life. Adding or removing a new room or an entire story is easily achievable. If a room is no longer needed, it can even be traded with another Celcius homeowner, reinforcing the circular aspect of the house and providing the opportunity to downsize the home for comfortable senior living.